Police operations are a serious issue right now nationally. Citizens want to know that they will be treated fairly without regard to the color of their skin or individual beliefs.  I believe it is important for you to have some background on Lebanon City’s history and demographics, as well as what police department policies we have had in place, new policies implemented and how operations have evolved to where we are today.

Our peak in population was in 1960 with slightly more than 30,000 residents.  Our population then continually decreased until 2010 when it reached 25,477.  Our population has been slightly increasing ever since. Over the last 60 years, we have maintained a consistent number of officers ranging from 39 in 1960 to a peak of 47 for just a couple years in 2003 to 41 officers currently.  There are a variety of approaches to determine how many police officers a community should have based on population or workload.  Lebanon City probably should employ around 60 officers based on our population.  I would like to further review the workload approach…, but regardless of the method used, it all comes down to the budget and what a community can afford.

The good news is that serious crime in Lebanon City has been decreasing and 2018 represented the lowest overall count in Part 1 Crimes since we formally started reporting crime numbers.  Looking back more than 20 years ago to when we first started to track, serious crime has decreased by 42%.

Clearance rates are an indicator of how departments measure their ability to solve crime.  The department exceeded the national average in allPart 1 crime statistical reporting groups.  That is admirable.  This information is important for you to know that we do a great job at solving crime in the City.

Looking to the number of arrests and citations made over the last 3 years and the percentage of those arrests by race and ethnicity, please refer to the chart below:

The next chart breaks down the same number of arrests and citations, but I sorted them by Hispanic and Non-Hispanic with a comparison to the % of the population.  A reasonable person would be able to determine from the information that the number of arrests and citations for Blacks or Hispanics based on their % of the population are not out of line.

Although we do not ask employees what race or ethnic group they identify with, we recognize and want our department to be more diversified.  With a population that is made up of more than 44% of Hispanics and 5% Black or African American, our make-up does not match those percentages. About four years ago, we started to advertise vacancies in National Minority Update, which allows us to effectively target qualified minority candidates.  Almost three years ago we changed our hard copy application to Police App, a national on-line employment application, to reach a larger recruitment area, including areas more diversified.  To financially assist people of lower income so they can afford to attend the mandatory police officer academy training, more than two years ago, the City implemented an initiative to reimburse or pay upfront for the costs of training.

The City also conducts its own training on top of what is required by MPOETC.  The supplemental annual training includes use of force, use of the Taser, de-escalation and scenario training based on changes in the law.  Also, only a portion of our officers had received sensitivity training until last year when I mandated it for ALL employees annually.  Through a partnership with Crisis Intervention, now all patrol officers and supervisors have received this training. We also have had a conversation with Crisis Intervention on ways to create a more inclusive working/training relationship.

The City is in the process of implementing a Body Worn Camera Program. We received a 50/50 matching grant for BWC and ordered them this past Spring with their delivery in September of this year. Training is currently occurring and after training is completed, we will implement their use. There are several reasons to acquire BWCs.  They can improve officer accountability, improve community relations, enhance officer training, and improve evidence quality or make cases easier to prosecute.

Sustained– The incident is determined to have occurred and an assessment is made to determine the level of discipline, re-training, or counseling to be recommended to the officer(s).

Insufficient Facts– There are not enough facts to prove whether the incident occurred or not.

Exonerated-The incident occurred, but the Officer did not violate any laws or any City Police Policies or Procedures.

Unfounded– The investigation determined that the incident did not occur.

The complainant will be notified by the Chief or Captain of the findings & disposition of the investigation.

Concerning the discipline of patrol officers, when an Officer is alleged to have committed an offense, the Captain who is NOT a part of the bargaining unit, investigates and makes a recommendation to the Chief. If it is founded and represents a serious offense, then the Chief makes a recommendation to the Mayor for discipline. A decision for appropriate action is made in accordance with contractual and labor laws.  If the officer does not agree with the action, the officer may appeal the decision to the Civil Service Commission, which body is made up of three citizens independent from the police department or Mayor’s Office or the officer may file a grievance.  The last step of a grievance would be a hearing before an independent arbitrator, who is not affiliated with either party.

Although even one complaint is one too many, looking at the number of arrests made and individuals taken into central booking over the last 3 years, you can see that hardly any formal complaints were filed. 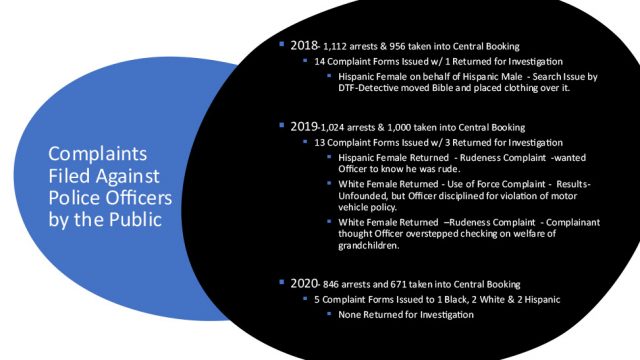 Looking again at the last 3 years, I think a reasonable person could deduct from the bullet points below for ANY use of force including hands that the City typically uses the least amount of force necessary. 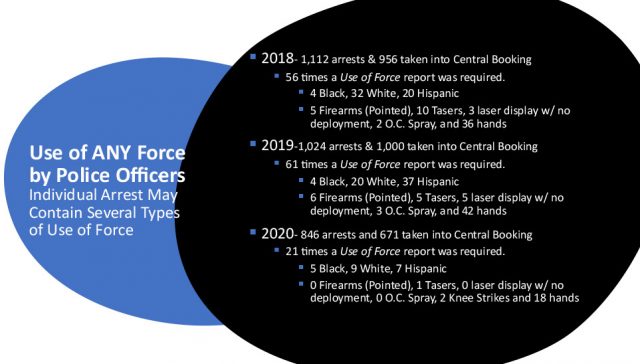 Some of these calls involve individuals with serious and untreated mental health issues.  We recognize the need for collaboration with our partners and are committed to having these discussions. 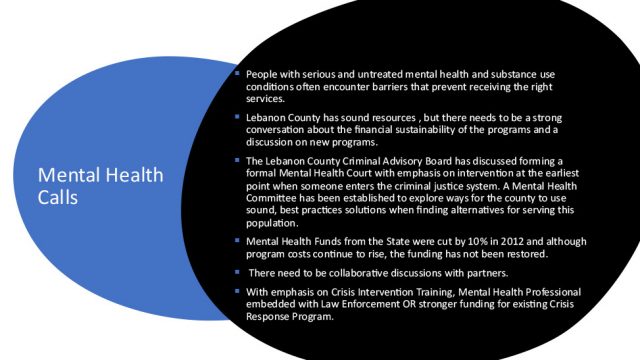 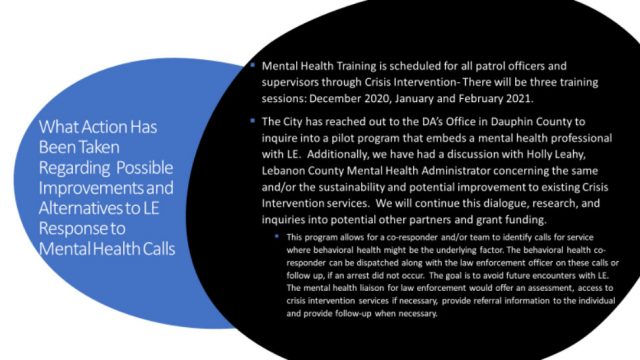 It is important to me and the members of the Lebanon Police Department to build relationships with our community members through interactions.  These interactions can be made with local agencies and members of the public, creating partnerships and strategies for reducing crime and disorder.

The types of interactions that my Office and the police department are involved in on an ongoing basis vary: Neighborhood Watch Associations, National Night Out, Officer Friendly Show, Police Read to Me, Walk with a Cop and Walk with the Mayor, Bigs in Blue (Big Brothers & Big Sisters), Hope-Esperanza T-Ball League Sponsor and participating in other community events, not excluding an impromptu basketball game or catching a football with neighborhood kids.  We have developed some long-tenured relationships with community members and organizations, and we will continue building on those critical connections.

Regarding racial equity, in June of 2020, I released the City’s commitment to racial and social equity.  Some of these commitments were in place during my entire tenure as Mayor, but some are new. 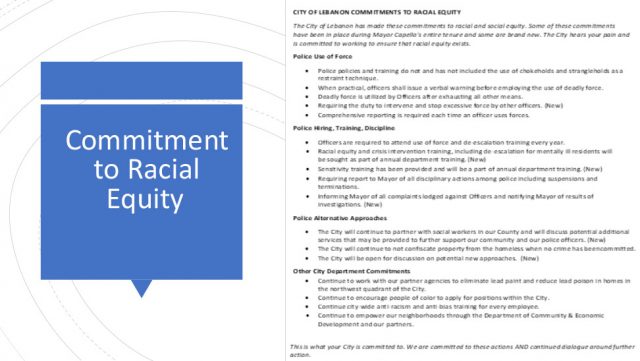 Additionally, the Chief and I attended a local Anti-Racism workshop facilitated by SARCC and other community leaders.  We recognize that this issue is evolving.  We have more to learn and it is a process, but we are committed to improvement in this area.

In order to assure that all police departments remain committed to safe policing, the President mandated all law enforcement agencies certify that they:

The City had these policies in places for decades except for the use of chokeholds.  The City never trained to use them; nor endorsed the technique when apprehending someone.  We recently placed this in writing. There also are 10 items that are not required, but the DOJ has set forth that a department should consider incorporating the following principles within its policies and procedures.

The City possesses ALLof the outlined policies and procedures. 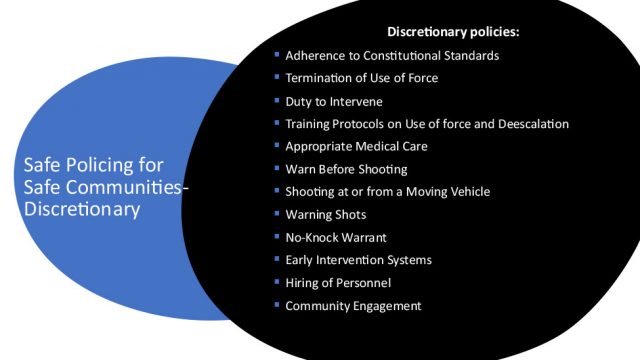 The Governor released this list of requirements to us in October, 2020.

Database– The City will comply when the database is made available.

Backgrounds– The City already completes comprehensive backgrounds on applicants, but the City will comply with the disclosing information requirement.

Mental Health Evaluations– The City already performs these evaluations when determined to be appropriate.

Training– The City already complies with the training aspect of the new law.

I hope that the information shared with you is helpful in gaining a better understanding of police operations in the City.  It is our intent to maintain and improve upon your trust. We are here to serve the people and provide law and order in a fair and transparent manner.  That is our pledge.